My mom has a funny sense of humor so she always gets me a pair of crazy socks.  I have “Happy Birthday” socks. I have black socks with vibrant orange pumpkins on them.  I even have socks with Chicago’s Navy Pier on them.  The funniest pair was given to me last year.  It’s hot pink socks with squirrels on them.

She gave them to me because it represents a passage from a Rein Rant N’ Rave that I wrote in 2007.

We all know, that everyone isn’t a “reader” so the Rant morphed into what it is now: a 4X8 glossy card by Shutterfly that includes a collage of four photos with several bullet points summarizing the year. 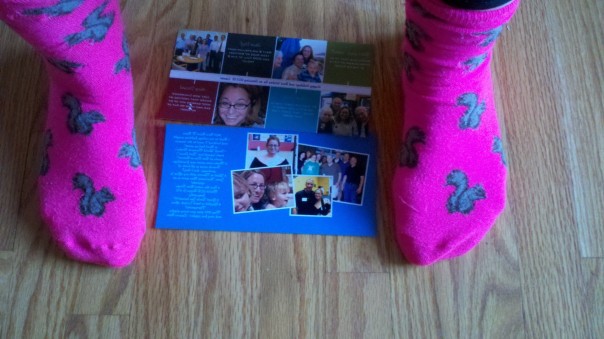 It used to take me a good week to compose the annual rant. Mostly, because it isn’t that easy to come up with material. Perhaps, thank to this blog, this year’s card was the easiest one yet.  The year, overall, was stressful! However, the pictures promptly revealed themselves and the synopsis wrote itself.  This process made me reflect on the highlights of the Rein Rant N’ Rave over the past several years.  Two of them come to mind right now.

1. 2005: Fast forward to the World Series starring your Chicago White Sox! I went to the epic games 1 and 2 at Cellular Field with Sports Virtuoso, my dad’s co-author and honorary second son. Just after the 7th inning in game 2, a bit tense due to the ridiculously close game, I bought pretzels and water for us.  When I came back with the surprising treats for Sports Virtuoso, he said, ” This is the momentum shifter”.

Poof! Paul Konerko hits the Grand Slam and the momentum has truly been shifted in our favor!  When we got the homer at the end, we all knew it would happen because we knew we were going to win.

2. 2007:  the summer of the scary squirrels. A real-time re-cap: panic ensued when I see a squirrel with my bedroom wall insulation stuffed in his mouth taunting me as he sits on my ledge! Sports Virtuoso races over to taunt the critter. The window got repaired with new wood within hours.

Alas, ten days after that, the same gnawing noise emits from another window in my bedroom compliments of the same snickering squirrel! UGH!  Finally, the tree is trimmed and the second window is repaired. For a month I slept in my living room on alert for a third invasion, just in case.

IT DIDN’T HAPPEN, but I was blown back into my bedroom by the blizzard last February – but that will be saved for another blog post.