← Oopsie – Better Curb That Egregiousness
Girl, I Want to Skate Backwards With You →

Years ago, in the early 1990s, I had a deep water phobia so I took three cruises in a year-in-a-half.  For the first cruise, I went with my two best friends from college.  One evening, we went exploring and came across a dancing contest. The movie, Dirty Dancing, was all the rage back then.

People looked at me and I was typecast.  (like the time I was cast at the “little old woman” as a four-year-old because of the glasses ).  But this time I was thrown on stage because I looked like Jennifer Gray.

“Nobody Puts Baby in a Corner”

While I loved the movie, I could not dance. This was a dancing contest so I had major concerns.

I was pushed onto stage with Heinz from Switzerland. A blond-haired blue-eyed John Travolta from Saturday Night Fever in the making.

I’ve Got the Moves!

His sexy accent and gentle ways made him an excellent partner for the contest and I was immediately put at ease.  There was no awkwardness at all. I looked at the other girls who were nervous because they had to dance with guys they had never met. But I got the hot looking funny one and we acted like it was a reunion.

The first round was a blur because he just picked me up and whirled me around like a wind sock. I squealed as he literally took my breath away.  It was a wonderful ride full of spins and twirls that required very little effort on my part because he just picked me up and threw me around in circles. When he put me down, I was dazed. I felt like I had been on one of those rides at the amusement park but could hear the crowd roaring with applause. It was the first time I had ever heard applause for my dancing.

We made it to the finals and Heinz gave me strict instructions to rip his shirt off.  When I failed to comply, because I was laughing too hard, the ride started again and he whipped me around and we spun our way and took home the Dirty Dancing Champion Title!

Thanks for the dance, Heinz, and come to think of it, “I had the time of my life.” 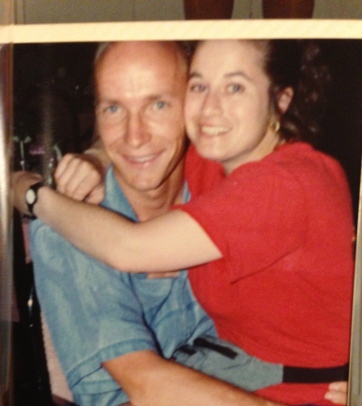 The fanny pack just makes the shot so much better…

← Oopsie – Better Curb That Egregiousness
Girl, I Want to Skate Backwards With You →